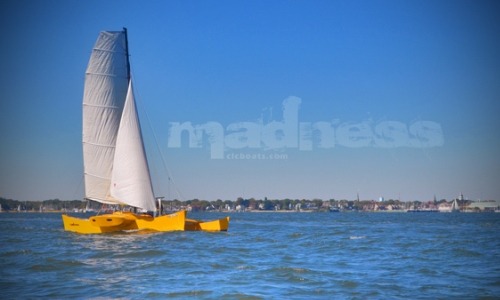 One big hull, one little hull.  Lots of speed, not much money.

Madness is a lightweight “Pacific” or windward proa, intended for fast cruising with two adults or daysailing with four.  With a payload of just under 1000lbs, accommodations are ideal for an adventurous couple who want to cover a lot of ground, island-hopping through the Caribbean or up the coast.

The design brief was for an elegant, inexpensive, and relatively easy-to-build multihull for fast cruising on the Chesapeake and in the Bahamas.  Much care was taken to minimize exotic, difficult-to-use materials like carbon fiber and the hope is that this design is more accessible to the home builder than anything capable of the same speeds.

Madness was inspired by, and designed in direct consultation with, proa guru Russell Brown.  The design is a fusion of his 30-foot plywood Jzero design from the 1970’s, his more-refined cold molded 36-footer Jzerro, from 1993, and my own experiences with the proa Mbuli, which John C. Harris designed and built in 2000.

Sea trials in the fall of 2011 and throughout 2012 far exceeded expectations.  Madness is fast, perfectly balanced, docile to handle, and strong.

As of this writing (April 2012) we have shipped five kits to courageous "early adopters."  The quality of feedback has been very encouraging, and we have now released a comprehensive plans package.

In the Western Hemisphere proas are still considered somewhat experimental, notwithstanding the pronounced success of “westernized” proas by Dick Newick and Russell Brown, which have accumulated tens of thousands of sea miles.  As so few western sailors have experienced a Pacific proa (in which the outrigger is kept to windward), much is made of their tacking procedure:  the boat is stopped, the boom swung around, and one bow is exchanged for another.  On paper, this is a head-scratcher.

On the water, however, even a sailor with moderate experience “gets it” instantly, and falls under the spell of the proa’s peculiar handling advantages.  Tacking a proa, a cause of confusion and concern among armchair sailors, is revealed on the water to be a casual exercise undertaken without the slightest drama, no matter the conditions.  In a conventional western sloop of similar horsepower and performance, tacking is a frantic exercise of flogging and fouling jibs, dangerous swinging booms, the danger of hanging up in irons, and a delicate process of gathering way again on the new tack as quickly as possible.  Jibes are worse.


In a proa, the boat is stopped in tacking and jibing and holds station on its own with the mainsail feathered to  leeward.  (It’s a good time to take a moment and grab a beer, something that would be unthinkable in a conventional boat mid-tack.)  One jib is dropped and another hoisted on the new tack.  When ready, you throttle-up with the mainsheet and presently you’re doing 15 knots on the new tack.  The process isn’t ideal for short-tacking up narrow channels.  However, Madness handles well on all points under mainsail alone.

Proas are the ONLY sailboats that can be reliably stopped, parked, and reversed on whim.  I have never been in any sailboat type that I’d rather work into a crowded harbor under sail on a windy day.

Having gotten the handling peculiarities out of the way, everything else about the proa configuration is absolutely compelling.  No multihull can boast a lighter or easier-to-engineer structure.  This pays off for the home-builder, who is spared the need for high-modulus crossbeams and attachments.  There is simply less to build than either a trimaran or a catamaran.

Proa sailors enjoy other handling advantages.  Instantly noticeable under way is the easy motion.  With the outrigger just skimming the water (unlike the trimaran’s hard-pressed leeward ama), the lack of nervous pitching is easy on the crew and keeps airflow attached to the sails.  And the unusual rig geometry of the Brown-styled proa sloop opens a huge slot between jib and mainsail, making this style of proa exceptionally close-winded.

Madness is built using techniques that are state-of-the-art for about 1975.  6mm okoume plywood panels are stitched-and-glued together very quickly and sheathed on both sides with ordinary plain-woven e-glass.  Every part in the boat is pre-fabricated on the bench.  The prototype, built at Chesapeake Light Craft, was whizzed out on a CNC machine, making an affordable kit possible.  Plans builders get full-sized patterns for every part in the hull.  Thanks to the fore-and-aft symmetry of a proa, the longest pattern is just over 15 feet.

Even without resorting to exotic materials, a very light hull is the result.  Slung from my digital scale, the stripped main hull is right at 500 pounds.  The outrigger, crossbeams, rig, and outboard account for another 500 pounds.

Thus, at 1000lbs rigged, Madness compares directly with a Farrier F-24 in terms of SA/D---at a tiny fraction of the cost and building complexity.

Something is gained, and something is lost:  proas don’t have a lot of volume for their length.  However, the payload is just under 1000lbs, which will allow two uninhibited adults to cruise for months, or three to race the boat for a few days.

There are two berth flats fore and aft in the main hull, plus a wide, comfortable berth in the lee “pod.”  On my boat, Madness, one of the berth flats has been converted to conceal a chemical head, and above it is mounted a lightweight galley that slides out of the way.

In good weather the crew will sometimes sleep on the trampoline.
The ama contains self-draining lockers for lines and fenders.

The skipper drives the boat from the motorcycle-sidecar-like cockpit adjacent to the cuddy.  Draglinks are led
from the tiller yokes to the cockpit.  The crew occupies a comfortable “park bench” style seat on the trampoline to windward of the outboard sled.

The lee “pod” makes capsize very difficult.  In four proas featuring a lee pod of similar proportions, Russell Brown has accumulated ocean crossings and 30 years of coastal sailing without managing anything more than a few knock-downs.  Additionally, the outrigger contains up to 700 pounds of water ballast.  The ballast tank is filled using very simple and reliable plumbing: a bucket through a deck plate.  It’s emptied with a bilge bump.  Sea trials of Madness revealed that water ballast will only be necessary when racing or showing off.  Otherwise, a reduction in sail keeps the boat flat.

The mast is stepped on the windward edge of the cockpit, with all halyards right at hand.  Winches and sheet cleats are located on the flange that stiffens the mast bulkhead.  Because the mast is mounted 39” to windward of the main hull’s centerline, struts are required to sheet the mainsail.
The jibs are mounted on continuous-line furlers.  In tacking, the current jib is rolled up, then doused completely to allow the boom to swing 180 degrees onto the new tack. Then the “new” jib is hoisted and unfurled.  The mast may be rotated through about 90 degrees for best performance.

Because of the mast location, there is no danger of losing the mast in an aback situation because it is supported by stays to the four corners of the boat.  The very broad staying base allows a lighter mast, with spiraling gains in weight and complexity.

Provision is made for an asymmetrical spinnaker.

Madness was fitted with the square-top rig shown in the drawings.  A smaller “cruising rig” is meant to inspire builders to look for used masts and sails, which will cut the costs dramatically.  Madness’s carbon stick and Vectran sails cost as much as the entire hull.

An outboard of 2hp to 6hp is mounted on a retractable sled beneath the crossbeams, convenient to the skipper. Sea trials showed 5 or 6 knots with a 2hp in calm conditions, and up to 8 knots with a 4hp.

Madness is completely demountable for road transport.  Six easily accessible bolts in the main hull and four bolts on the outrigger fasten the crossbeams.  The trampoline is rigged with bungie cords for quick release, and two pins disconnect the outboard sled.  With the main hull at 500lbs, a group of friends can lift it onto a trailer.  It measures 8’3” at the widest point, making trailering easy behind a relatively small vehicle.  Total trailer weight is less than a Montgomery 17 pocket cruiser.